Start a Wiki
With The Dead are a four piece doom band from England formed on 31st October 2014. The band started out as a collaboration between well known doom musicians Mark Greening and Tim Bagshaw (both ex-Electric Wizard and Ramesses) as well as Lee Dorrian (Cathedral).[1] In January 2016, the lineup changed, with Greening replaced on drums by Alex Thomas (ex-Bolt Thrower) and Leo Smee (ex-Cathedral) being added on bass.[2] 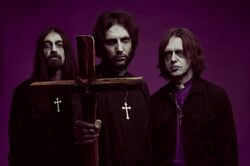 With the Dead began sometime after Mark Greening had been fired from Electric Wizard in 2014. Mark Greening presented to Lee Dorrian recordings with interest in forming a new band and releasing it on Rise Above Records, at one point Greening himself even intended to be the vocalist for this project.[3] Initially the intent was to make an EP but Dorrian declined in favor of it being an album. At some point during the sessions Tim Bagshaw had visited the United Kingdom to help with the recordings and Lee Dorrian was approached to join as vocalist to which he accepted. The recording sessions for the album would follow in March of 2015.[4]

Tim Bagshaw stated in an interview that the project was formed from "knowing each other for many years" and describing the initial forming with the following:

Lee Dorrian has expressed interest in doing a follow-up record and some live shows in the future along with some personal satisfaction with the band. In an interview with The Sludgelord he went on to state the following:

With the Dead's self-titled debut was released nearly a year after their formation on October 16, 2015 via Rise Above Records.

On January 23, 2016, Mark Greening announced via Facebook that he was no longer in "With The Dead", with the following statement:

On January 25, 2016, the official With The Dead Facebook page made the following statement in response:

On 28th January, the band uploaded changed the information and cover photo displayed on their Facebook account, confirming that Alex Thomas (ex-Bolt Thrower) would replace Greening on drums, with Leo Smee (ex-Cathedral) also joining the band on bass.[2]

In November of 2016, the band announced a second album was in the works, set for release in 2017. On 30 March 2017 the band released a new track entitled Vessel of Solitude for the 2017 May issue of the Decibel Magazine's Flexi Series though the song will not be on the forthcoming album.[9] On 13 July 2017 the band would announce a tracklist and album cover for their second studio album: Love from With The Dead. The album is set to be released on 22 September 2017.[10] The band has since announced a small handful of live performances in the UK, Finland and The United States in the summer of 2018. On 9 July 2018 it would be announced in an update from the crypt that Darren Verni (Unearthly Trance, Serpentine Path) would be taking over on the drums for the band's 2018 live performances.[11]

In August 2018, one of the members had suffered some health-related issues, forcing the band to cancel their appearance at Bloodstock Open Air. On 14 August 2018 it would be announced that due to unforseen circumstances that Bagshaw would not be playing with them at Psycho Las Vegas, rather Leo Smee handling guitar and bass duties with a special guest performing at the end of the set.

On February 1, 2016, With The Dead announced two shows in the UK. On 10th April they performed at The Deaf Institute in Manchester in what was first public performance (With the lineup of Dorrian, Bagshaw, Smee and Thomas). On 11th April the band will also performed at O2 Institute in Birmingham.[12]

The first confirmed live performances for With The Dead were at The 2016 edition of Roadburn Festival on Friday, April 15, 2016. This performance was selected by Curator Lee Dorrian.[13]

Another performance was announced at Hellfest in Clisson, France on Sunday, June 19, 2016.[14]

Retrieved from "https://riffipedia.fandom.com/wiki/With_The_Dead?oldid=13237"
Community content is available under CC-BY-SA unless otherwise noted.