The inaugural edition of The Power of The Riff, curated by Greg Anderson and Sam Velde, was initially announced in the summer of 2010. Notably this event was presented by Converse as a free, all-ages event with the shoe company giving away 30 pairs of free shoes to the first visitors along with fifteen hidden pairs indicated by clues within the venues. On 14 July 2010, Corrosion of Conformity would spark a mini-tour with their three-piece Animosity-era lineup alongside Goatsnake, Black Breath, Eagle Twin and Righteous Fool. Including the Power of The Riff event this was billed as the Southern Lord West Coast Mini-Tour.[1] 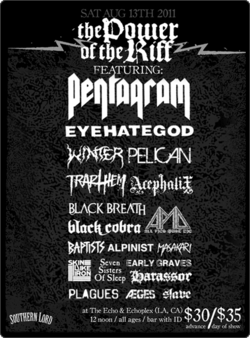 The 2011 edition of Power of The Riff was held on Saturday 13 August 2011. Like the previous year the festival was a one-day, two-stage event featuring a host of bands with ties to Southern Lord. However unlike the last year the festival would adopt sort of a touring festival motif with four mini-festivals in the days after. The following Power of The Riff events would be held at the following locations and dates:

Power of The Riff 2011: San Francisco and Seattle[edit | edit source]

2012 would present two Power of The Riff festivals but rather as sort of a touring festival from the previous year, one event would be held on the West Coast while the other would be held on the East Coast. The first of the two major events would return to the Echo and Echoplex in Los Angeles on 11 August 2012.

The first (and to date, only) edition of Power of The Riff East was announced in the summer of 2012, with the event set at Warsaw in Brooklyn, New York on 1 and 2 September 2012. On 20 August 2012 it would be announced that Poison Idea would cancel their appearance (Along with their entire tour) with Hoax as their replacement.[5] On 22 August 2012 it would be confirmed that day 1 headliner Pentagram would be performing Relentless in it's entirety.[6]

On 25 October 2012 it would be announced through various sources that Sunn O))) would be performing a West Coast tour with Dead in the Dirt and Loincloth. The final date of the tour and on the last date of The Mayan Calendar (20 December 2012) would see a special event at The Fonda Theatre in Los Angeles presented by The Power of The Riff featuring the following acts:

Opposition Rising were intended to open the festival but dropped off for unknown reasons. 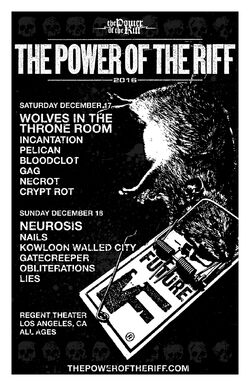 The 2016 edition of The Power of The Riff would be presented by Spaceland and Southern Lord Records. Functioning as a two-day event on 17 and 18 December 2016 it would be hosted at The Regent Theater in Los Angeles, California, USA. A pre-party would be held on 16 December 2016 at The Complex in Glendale, California. This pre-party would be headlined by Excel (And also serving as a release party for The Joke's On You.) along with Despise You and Deth Crux.[11]

On 11 September 2018, Southern Lord would announce a 2018 edition of Power of The Riff in lieu of the label's 20th Anniversary along with Sunn O)))'s 20th anniversary. The first band announced of course would be Sunn O))) in what is announced as their only California performance of 2018 and their final performance of the year. Notably, Xasthur was tagged in the Instagram post which implies he will be appearing at the show. While not explicitly stated if he will perform with Sunn O))), if he does it will be his first appearance with the band in 12 years.[12] Later that month, Darkest Hour, Xibalba and Xasthur were confirmed on the bill with more acts to still be announced. On 11 October 2018 it would be confirmed that the show would be sold out. On 30 October 2018 the remaining bands for the main show would be revealed to be Scream, Papa M and Entry.[13]

The 2018 edition of The Power of The Riff is slated for 18 November 2018 at the Echoplex in Los Angeles, California. A pre-fest is slated for 17 November 2018 at The Echo featuring The Sonics and The Primals along with more bands TBA.[14] In November 2018 it would be announced that the last band for the pre-fest would be announced to be This White Light, a new band featuring members of Pelican, Sunn O))), Gale Forces and Tattle Tale. This performance is set to be their live debut.[15]

Retrieved from "https://riffipedia.fandom.com/wiki/The_Power_of_The_Riff?oldid=21862"
Community content is available under CC-BY-SA unless otherwise noted.