Stoned and Dusted is an annual festival held in a secret location in the Mojave Desert in Joshua Tree, California. Initially active as Desert Generator in 2016, this festival was curated to replicate the generator parties and give people who couldn't make it to those events in the 80s and 90s a chance to experience such a thing.[1]

This event is largely curated by members of the desert rock scene such as Mario Lalli (Yawning Man), Brant Bjork and Sean Wheeler. 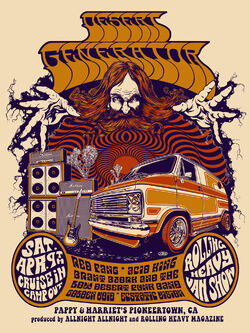 In 2016, Brant Bjork and members of the Desert Rock scene would work with All Night All Night Promotions, who had previously curated The Bandit Town Allnight Campout in 2014 and the Wet Hot Summer Van Show in 2013. This event would be an outdoor gig encouraging people to bring vintage vans. Bjork seen interest in the event as "a nod of the hat to a scene I was part of". The inaugural Desert Generator event was held on 9 April 2016 at Pappy & Harriet's in Pioneertown, California, USA.[2][3] 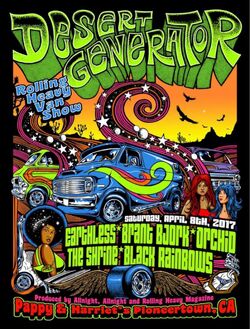 2017 would see bot a Desert Generator show once again at Pappy & Harriet's on 8 April 2017 and also the first Stoned & Dusted event the day prior in a secret desert location.[4]

In March 2018 it would be announced that Stoned and Dusted would be a full two-day festival at the secret desert location with fourteen bands performing over the course of the event. Notably, two bands from other countries in Sgt. Papers (From Mexico) and Bala (From Spain) would come for exclusive US appearances to the event.[6]

On 8 February 2019 the 2019 edition of Stoned and Dusted would be announced, set to take place on 25 and 26 May 2019. Like the 2017 edition the Festival would be split between Pappy and Harriet's and a secret location in the Mojave Desert. Both full lineups were announced on the same day. Mad Alchemy Liquid Light Show would provide complimenting visuals to the experience.[7][8]

On 2 January 2020 the Stoned and Dusted website would announce the 2020 edition, originally set for 23 and 24 May 2020.[9] On 6 February 2020 it would be announced that a third day would be added (22 May) along with most of the lineup for the entire weekend, with two days at Pappy & Harriet's and the finale in the Mojave Desert with support from Sound Guy On Acid and Mad Alchemy Liquid Light Show.[10] However on 3 April 2020 it would be announced that the 2020 edition would be canceled due to The CO-VID19 Pandemic, with rescheduled dates lined up for 2021.[11]

On 20 May 2020 Couchlock and Rock would be announced. It would be a live YouTube streaming event hosted by the California Desert Wizards Association.[12] Along with video recordings of performances from last years Stoned and Dusted would be a solo performance of Brant Bjork on 29 May[13] and Yawning Man on 30 May, performing in the desert with multiple cameras.[14] Yawning Man's live performance would be recorded and released as Live at Giant Rock on 30 October 2020 via Heavy Psych Sounds.[15]

Retrieved from "https://riffipedia.fandom.com/wiki/Stoned_and_Dusted?oldid=23471"
Community content is available under CC-BY-SA unless otherwise noted.