Start a Wiki
Om (sometimes stylized as OM) are a three piece experimental stoner band originally from San Francisco, California, USA. Formed in 2003, they were initially known for being the first project involving Al Cisneros and Chris Hakius since Sleep's dissolution in 1997. Initially the band formed as a power duo, but have been a trio since 2009.

While the nucleus of Om's sound is based on stoner metal (the band's MySpace refers to their sound as simply "(((VIBRATIONS)))), the band draws from a host of other influences such as psychedelic rock, Middle Eastern folk, dub, reggae, post-rock, and other sounds. The band's lyrics are heavily inspired by spirituality and various forms of religion, namely Eastern Orthodox and Middle Eastern variations.

Since their inception, the band has released five studio albums, three live albums, and has toured all over the world making appearances at different festivals over the years. 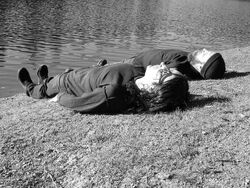 Om originated from San Francisco, California[1], but as of recent years the respective members have residence in Albuquerque, New Mexico (Cisneros), Portland, Oregon (Amos), and Louisville, Kentucky (Trotter). Their sound could loosely be categorized as traditional stoner metal, but also has influences in doom and psychedelic rock, as well as a wider range of influences in more recent years. They were formed in 2003 by original Sleep bassist Al Cisneros and drummer Chris Hakius. In a departure from Sleep's stylistic influences of Black Sabbath and stoner rock, Om's influences are driven from spirituality and the concept of freedom. The name of the band itself is derived from Hindu culture, where the sound 'om' represents the natural vibration of the universe.[2] All of the bands studio albums from Pilgrimage onward, feature Eastern Orthodox iconography.

After Sleep had officially disbanded in 1997, Chris Hakius joined former Sleep guitarist Justin Marler to form The Sabians, which lasted from 1997 to roughly 2004. At the same time, Al Cisneros stopped playing music entirely, at one point becoming a chess teacher[3]. At some point in 2003, Cisneros met up with Hakius about possibly forming a new band, opting to not have a guitarist due to the intrigue of exploring music as a duo.[4] Om officially formed in 2003 with their first official live performance was on Sunday, August 14, 2004.[5] On February 14 of 2005 their debut album Variations on a Theme was released via Holy Mountain Records[6], billed as the "triumphant return of Cisneros and Hakius", attaining largely positive receptions. The band sporadically played shows around the San Francisco area in 2005, notably the ArthurBall.[7]

Conference of the Birds followed on April 17, 2006 and has since become one of the duo's seminal releases.[8] Two split releases, recorded during the Conference of the Birds sessions, followed that year; the first was a split with Current 93 titled Inerrant Rays of Infallible Sun (Blackship Shrinebuilder) released in June[9], with the second, a split with Six Organs Of Admittance, dropping in July[10]. Sporadic appearances in New York and a mini-tour followed in support of the album (but no information on a full 2006 tour has been found). A live recording of "To The Shrinebuilder" culled from a show in Toronto became available for free on the Om Vibratory website (and later, the Japanese version of Pilgrimage) .[11]

At some point after the release of their second album, Om toured with Grails, where Cisneros would meet and befriend future drummer Emil Amos. After this tour was the band's first full tour of Europe, including a date at the Roadburn Festival. On September 13, 2007 another album would follow in the form of Pilgrimage, their only studio release on the Southern Lord label.[12] Two North American tours, the Pilgrimage Tour, would happen in support of the album. Shortly after, the band performed two nights in what was the Israel Pilgrimage. Their December 5, 2007 show in Jerusalem has become and infamous performance that spanned five hours[13], a portion of which saw a physical release on the Southern Lord LP Live at Jerusalem in 2008.[14]

In 2008 the band performed a short tour of the west coast of the US, and also had a short east coast tour scheduled. On January 20, Om performed at the Echoplex in what would be Chris Hakius' final performance with the band, with a jam including sections from future songs "Thebes" and "Gebel Barkal" being the last song played.[15]. Chris Hakius would retire from music after this show, barring a brief return at the beginning of the Sleep reunion in 2009. In an interview with AVClub, Al spoke of Chris' depature:

Shortly after Hakius' departure, Cisneros reconnected with Emil Amos, which ultimately led to Amos becoming the new drummer for the band.[17] The band's sound notably shifted with Amos' style being more based in complexity and fills as compared to Hakius' straightforward style. The first recording with Amos as drummer was the single, Gebel Barkal which was recorded on March 8, 2008 and released on the Sub Pop label on August 15, 2008.[18] The first known performance of this lineup is May 17 2008 at the Victoriaville Festival in Quebec. Tours of Europe, Japan and the United States would follow. Notably, one of these performances on September 20 in Monticello, NY was at the All Tomorrow's Parties festival. This set would end up being released as Live Conference (sometimes titled "Conference Live") on Important Records a year later.[19]

Al Cisneros would speak fondly of Emil joining the band in an interview with The Quietus:

God Is Good was recorded in March 2009. This was around the same time Robert Aiki Aubrey Lowe would join the band's live lineup, expanding it to a three-piece. Eventually, God Is Good was released on September 29, 2009 via Drag City.[21] Various tours and festival appearances would follow before the following album Advaitic Songs was released on July 24, 2012.[22] This album explored Middle Eastern and experimental influences more heavily; a drastic shift from their prior sound.

In 2013, the band performed at the Temple of Dendur, located in the Metropolitan Museum of Art in New York , performing a special, site-specific version of "At Giza". Temple of Dendur: Metropolitan Museum of Art 2013 was the billed name for the show. [23] In November 2013, the band played the final holiday camp edition of the world famous All Tomorrow's Parties festival in Camber Sands, England.[24]

The band did two tours of the United States in 2014 with the band Watter. In December 2014, they released a third live album, titled merely Live[25]

Om would continue to play sporadic live dates and played another All Tomorrows Parties event at the Electric Ballroom, London, England in November of 2015 along with a full European tour that year.[26]

Om have a follow-up to Advaitic Songs in the works, with initial recording done at Empty House Studio in Albuquerque, New Mexico.[27] The band embarked on a short West Coast tour in 2016, their only dates throughout the entirety of that year. Om's only announced appearance of 2017 will be in late October at Days of Darkness, a spin-off festival from the same people who conceived Maryland Deathfest (Also at the same location). Om were announced as one of the headliners alongside Neurosis. Rumors would be abound for a sixth album as the band performed only a handful of shows once again in 2018, namely headlining appearances at Levitation Festival and Freak Valley Festival along with an appearance at Muddy Roots Music Festival in which they shared the main stage with High on Fire and Neurosis. Though not known to the public at the time this would be the last live performance with Robert Aiki Aubrey Lowe on keyboards.

On 6 October the band would make their debut appearance in Mexico at Hipnosis Festival. Notably the lineup was different, with Tyler Trotter (Phantom Family Halo, Watter) performing synths and keyboards rather than Robert Aiki Aubrey Lowe.[28] 2019 would see initial show announcements at DesertFest London, DesertFest Berlin and Hostsabbat along with recording sessions happening throughout the year. Ultimately 2019 would prove to be the band's most productive on the live stage in years, with alternating North American and European tours. On 9 October 2019, Drag City surprise released a double 10" of their live performance on Radio 1 BBC that May, their first release to feature the lineup of Cisneros, Amos and Trotter.[29]

Retrieved from "https://riffipedia.fandom.com/wiki/Om?oldid=20030"
Community content is available under CC-BY-SA unless otherwise noted.