Modern Cult Records was a venue & record store in Louisville, Kentucky, USA. Though the venue is willing to host bands of any genre, especially local bands in the Kentucky area, Modern Cult has hosted a multitude of bands in the stoner/doom/psychedelic genres over the years. The team behind Modern Cult have also worked to being bands like Jucifer, Pallbearer, Voivod and Inter Arma (To name a few) to the Kentucky area.

Their slogan was "You're one of us now.". 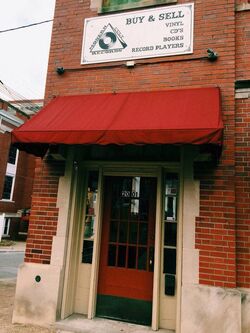 Modern Cult Records began in the Clifton neighborhood of Louisville, Kentucky in October 2013 by Sean Liter and Tyler Chanley, both of whom had previously worked at local music store Underground Sounds with a mindset to create a music store that catered to local bands and was viable as a venue as well.[1]

Along with a huge emphasis on providing a venue for local bands the venue/music store expresses a keen interest in psychedelic rock and doom metal bands, having hosted multiple bands of the genre in the store at the time.

On 26 August 2015 it was announced that the store was moving out of the Clifton area and relocating to the Highlands, a popular area in Louisville. After a final show on September 15 in the original store, the store would close for the move from 16 September to it's official reopening in the Highlands on 1 November[2]. The now-expanded space hosted a larger selection of music along with a separate section for books and a larger space for performing bands. The venue would maintain ties with the local Louisville scene as a whole including the all-ages crowd.

By August 2016 however, Modern Cult would experience a period of inactivity with the store only sporadically open for (at the time) unknown reasons. Eventually the venue would host a final show on 17 October 2016 and close it's doors.

Notable Performances at the VenueEdit

NOTE: This is not a full list of performances at Modern Cult. All shows sourced from Modern Cult's Facebook Events page.[3]

Retrieved from "https://riffipedia.fandom.com/wiki/Modern_Cult_Records?oldid=12381"
Community content is available under CC-BY-SA unless otherwise noted.