Start a Wiki
Mind Funk were a band from New Jersey, active from 1989 - 1995. Their music incorporated elements of grunge, stoner rock, heavy metal and even funk metal in their first album.

Mind Funk was also notable for featuring a plethora of musicians who either came from notable bands or went on to notability in other bands such as Reed St. Mark (Celtic Frost), John Monte (M.O.D., Ministry), Shawn Johnson (Mos Generator), Louis Svitek (M.O.D., Ministry) and notably the final musical involvement of Jason Everman (O.L.D., Nirvana, Soundgarden) before joining the U.S. Army and the Special Forces. 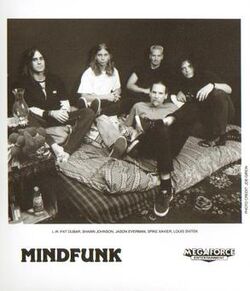 Mind Funk, initially known as Mind Fuck, was founded by two members of Chemical Waste (Monte & Coppola) along with Reed St. Mark (Who had just left Celtic Frost), Patrick Dubar and Louis Svitek in 1989. Epic Records forced the band to change their name as they signed to the Sony/Epic-label and released their self-titled debut album in 1991. Jason Everman, known for stints on guitar and bass with Nirvana and Soundgarden, joined in 1992 as Coppola and other members left for their second album Dropped, a reference to the band being dropped from Epic. Everman would leave the band in September 1994 to join the US Army 2nd Ranger Battalion and the Special Forces.

The band would release one more album as a four-piece in 1995 (People Who Fell From The Sky) before disbanding. Because of their short tenure very little live footage of the band exists barring an appearance at Dynamo Open Air in 1993 along with sporadic tour dates.

Retrieved from "https://riffipedia.fandom.com/wiki/Mind_Funk?oldid=17842"
Community content is available under CC-BY-SA unless otherwise noted.