Lake on Fire (LOF) is a summer open air Stoner Rock festival. Typically taking place in August, the event is annually held in the small village of Waldhausen im Strudengau, in Austria.

Lake on Fire is distinctive for it's floating stage on the Nepomukteich, with the audience on the waterfront and many concert viewers in the water itself. Initially starting as a single-day party with largely local acts, it's expanded into a two day event hosting bands from around the world. Notably the majority proceeds of Lake on Fire are donated to charities, specifically children's aid.

The first edition of Lake on Fire Festival, at the time a single-day event, was held on 8 September 2012. The charity of choice was for a support centre for handicapped children.[1] 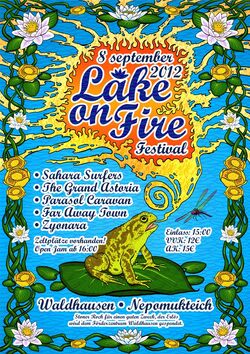 The second edition of Lake on Fire Festival was held on August 9 & 10, 2013. The charity of choice was for SOS Children´s Village. Sungrazer were intended to be one of the headlining acts but canceled due to disbanding roughly two months before the festival. Monkey3 were announced as their replacement.[2]

The third edition of Lake on Fire Festival was held on August 8 & 9, 2014. The charity of choice was for MOBISOM and support centers for handicapped children.[3]

The fourth edition of Lake on Fire Festival was held on August 7 & 8, 2015. Imagoscope Film and Visionenhändler Fotografie played a role in providing pictures of the festival and the impressions film (Now a yearly showcase for viewers and observers.). [4][5]

The sixth edition of Lake on Fire was held between 4 and 5 August 2017.[9] By 7 May 2017 it would be announced that the event had completely sold out.[10] Day 1 would notably feature an afterparty featuring Ufonauten along with Hazy Dawgs. Also of note is that Ufomammut was intended to headline the second day but ultimately dropped off due to illness.

The seventh edition of Lake on Fire was held between 3 and 4 August 2018, with initial donations to the local Waldhausen Red Cross among other places.[11]

The eighth edition of Lake on Fire would be held on 2 and 3 August 2019, with some of the proceeds going to various charities. Tickets would go on sale in late April and would be sold out before the month would even end.[12] Monster Magnet were intended to headline but ultimately were forced to cancel due to frontman Dave Wyndorf requiring emergency surgery and thus would be replaced by Colour Haze. The Obsessed were also intended to perform but ultimately canceled due to scheduling conflicts which led to the majority of their 2019 European tour being canceled. My Sleeping Karma were intended to play Lake on Fire but also canceled due to one of the members suffering from undisclosed health issues.[13]

The 2020 edition of Lake on Fire Festival was originally intended for 31 July - 2 August 2020. However with The CO-VID19 Pandemic the country of Austria decided that events and festivals would be prohibited through late August. Thus the 2020 edition would be moved to 2021. Lake on Fire would also donate 1.500€ to the neunerhaus in Vienna, an organisation that helps homeless people with food and medical care.[14]

While an official date has not been announced yet the 2021 edition of Lake on Fire would be presumably set for July/August 2021 and also in observance of the festival's tenth anniversary.

Retrieved from "https://riffipedia.fandom.com/wiki/Lake_on_Fire_Festival?oldid=19831"
Community content is available under CC-BY-SA unless otherwise noted.