Karma to Burn, (often called K2B), are a three piece instrumental, stoner rock band from Morgantown, West Virginia, USA. The band was formed in 1993 and, despite a hiatus between 2002 and 2009, continue to play to this day.

Karma to Burn were formed in 1993[1] by Will Mecum (guitar) and Nathan Limbaugh (drums), who had previously played together in Red Oak Conspiracy,[2] as well as Rich Mullins (bass), Jim Davison (guitar), Karim Chatila (vocals).[3] Both Chatila and Davison quickly left the band, as they decided to take an instrumental approach without the need for a vocalist or second guitarist.[3] Early after settling as a trio, the band recorded a tape of instrumental tracks, giving the tracks numbers as their titles.[4] They began to send their tapes to record labels, and would also phone record companies pretending to be other bands who'd heard an interesting band called Karma To Burn.[4] Karma To Burn was signed to Roadrunner Records in 1996 and originally planned to release an instrumental album, but Roadrunner pressured the band into finding a vocalist, stating that the contract was only valid if they did so.[5] After a brief trial of John Garcia (whose band Kyuss had recently disbanded) they hired a friend of theirs, Jay Jarosz, as their vocalist.[6] Some time after the hiring of Jarosz and prior to the release of their first album, Limbaugh left the group, and was replaced on drums by Chuck Nicholas.[6] Their first album, Karma to Burn, was released on February, 27th 1997. Karma to Burn reverted to an instrumental trio soon afterwards, with Jarosz swiftly leaving the band.[6]

Between April and May of 1997 Karma To Burn toured Europe as an instrumental trio, playing events such as Dynamo Open Air, where they were reunited with John Garcia, who was there playing with his new band Slo Burn. Karma to Burn played an unannounced set with Garcia, who joined them on vocals.[6] Whilst still in Europe, the band made some appearances on television. European audiences were unaware that the band had parted ways with Jarosz, so on some of these television appearances, the band would bring in roadie, Johnny Mac, to perform on vocals.[7][8]

In August and September of 1997, Karma To Burn toured the USA, opening nine shows for Corrosion of Confirmity and, later, ten shows for Clutch.[6] During these dates, the band performed a cover of ZZ Top's 'La Grange', with Pepper Keenan and Neil Fallon taking on vocal duties for the track respectively,[6] the latter of which can be seen on the Live 2009 - Reunion Tour DVD. In late 1997 Karma to Burn parted ways with Roadrunner Records, who were unhappy with the band's decision to remove their vocalist.[6]

In June 1998, Nicholas left the band and was replaced by Rob Oswald, creating what would be the classic lineup of Karma to Burn.[6] The band quickly went on to record two instrumental albums, 1999's Wild, Wonderful... Purgatory and 2001's Almost Heathen. In 2002, the band announced plans to record a fourth album for Spitfire Records, though despite alleged interest by both Pepper Keenan and Fear Factory's Burton C. Bell, Karma to Burn denied claims that they would be utilising guest vocalists.[2] Regardless, the album was never released as the band unofficially disbanded sometime in mid-2002 after their bassist, Mullins, had joined Speedealer.[2]

During the years of Karma to Burn's hiatus, Mecum, Mullins and Oswald all found other bands to play in. Mullins would be kicked out of Speedealer due to addiction problems, and went on to meet Daniel Davies, with whom he would form the band Year Long Disaster with after the pair passed through a rehabilitation program.[9] Oswald briefly became the drummer for Nebula, appearing on their EP Heavy Psych.[10]. Mecum went on to play guitar in his newly formed band Treasure Cat, who, as well as releasing their own full length, teamed up with Sons of Alpha Centauri to release a split album. [11]

On February 23, 2009, Karma to Burn reformed with the classic line-up of Mecum, Mullins and Oswald.[1] They band quickly went on to tour USA and Europe.[12] Their European tour included a second stage slot at the Download Festival[13], which has now become infamous for the wasp swarm above the crowd throughout.[14]

In May 2010, Karma To Burn released a fourth full length album, Appalachian Incantation which was produced by former Kyuss bassist Scott Reeder.[15] Appalachian Incantation was mainly instrumental, but also included their first vocal track since the band's self-titled album in the form of 'Waiting on the Western World', featuring Year Long Disaster vocalist and guitarist Daniel Davies.[15] Some copies of the album also included a bonus disc titled 'Cat Got our Tongue' including the song 'Two Times,' featuring former Kyuss vocalist John Garcia.[16]

In May 2010, in an interview with The Obelisk, Rich Mullins confirmed that Karma to Burn and Year Long Disaster had partially merged, with both bands beginning to share the same lineup: 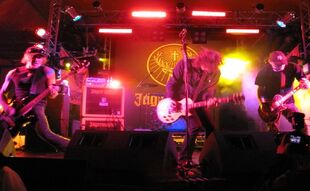 Karma to Burn performing at Sonisphere Knebworth 2010 after their merger with Year Long Disaster. 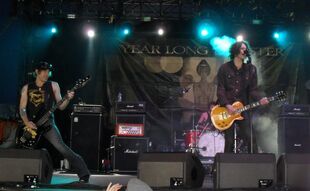 Year Long Disaster performing at Download Festival 2010 after their merger with Karma to Burn.
Add a photo to this gallery

In June of 2010, Year Long Disaster toured Europe with all three classic members of Karma to Burn joining Davies in the band.[18] Later in the year, Karma to Burn headlined the Jägermeister stage at the UK leg of Sonisphere Festival 2010.[19] In September of 2010, the band recorded in Palm Springs, California, USA with John Garcia.[20] It was speculated, due to prior comments by Mullins, that a recording would be used on Garcia's solo album (at the time, tentatively titled Garcia vs. Garcia), with another being used on a Karma to Burn album, but neither track has thus far been used.Cite error: Invalid <ref> tag; invalid names, e.g. too many Davies left the group and disbanded Year Long Disaster soon after recording returning the band to a trio. V was released in June 2011.

In April 2012, Karma to Burn headlined the opening night of the first edition of DesertFest London.[21] On 24th July 2012, Oswald announced via Facebook that he had been forced to leave the band.[22] Evan Devine of Morgantown metal band Ancient Shores replaced Oswald on drums.[23] Mullins also left the band before the end of 2012, being replaced by Irish bassist, Rob Halkett, leaving Mecum as the only founding member in the band.[24]

Retrieved from "https://riffipedia.fandom.com/wiki/Karma_To_Burn?oldid=17864"
Community content is available under CC-BY-SA unless otherwise noted.