Riffipedia - The Stoner Rock Wiki
Register
Don't have an account?
Sign In
Advertisement
in: Event, Tour, Om,
and 9 more

In fall of 2007 Om announced the second leg of their Pilgrimage US tour. Along with that were three other dates. Along with their scheduled appearance at Butlins Holiday Resort in Minehead for All Tomorrows Parties' Nightmare Before Christmas there were two dates scheduled for Israel.[1] 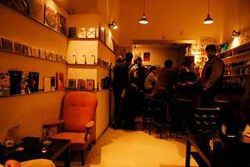 The first show of two was at Uganda Bar in Jerusalem, Israel. The band performed a selection of songs like "Bhima's Theme", "Flight of the Eagle" and "At Giza" before jamming for hours on end, unaware of how much time actually passed. While the actual time of the set itself isn't exact it's been speculated to have been anywhere from four to six hours. Al Cisneros spoke about the set in multiple interviews along with the experience of being in Israel:

It is ultimately unknown how much of the Club Uganda set was recorded beyond YouTube clips or the "Live At Jerusalem" album (see below).

The next night, OM would perform at the Levontin 7 in Tel Aviv, Israel. Reportedly the set there went roughly three hours with portions of the set showing up on YouTube.

Finally, the string of shows would close out at Butlin's Holiday Resort in Minehead for All Tomorrow Parties' Nightmare Before Christmas. They would notably share the stage with Aphex Twin, GZA (Performing all of Liquid Swords), Julian Cope, The Heads and festival curator Portishead.

NOTE: What is listed here are only songs known to have been played each respective night. The full sets and exactly how long they jammed are unknown.

Community content is available under CC-BY-SA unless otherwise noted.
Advertisement