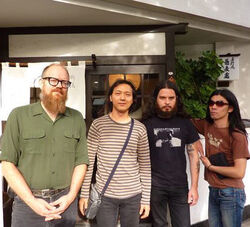 Ensemble Pearl was created as an audio art theater piece by D.A.C.M./Gisèle Vienne entitled "This Is How You Will Disappear".

Ensemble Pearl would be released on vinyl and CD in 2013 with a 2CD available via Daymare Recordings with a second disc of alternate cuts.

All songs arranged by Ensemble Pearl.

Retrieved from "https://riffipedia.fandom.com/wiki/Ensemble_Pearl?oldid=10902"
Community content is available under CC-BY-SA unless otherwise noted.