DesertFest London is one of several annual festivals which run under the DesertFest banner. Each year, the festival is a three day event showcasing bands from the whole stoner rock scene. The festival takes place in the Camden area of London, England. Like its German counterpart, the first event ran in 2012[1].

DesertFest London was first conceived of by Reece Tee and Jake Farey of the music promotions company Desertscene.[2] Desertscene started organising shows in 2009, the first of which was Truckfighters.[2] After gaining experience promoting individual bands and hearing the people at those shows' desire for a UK festival like Roadburn, they decided to create DesertFest.[2]

The first festival was officially announced on 26th July 2011 via a Facebook post,[3] but posters advertising the festival were placed at London's High Voltage Festival.[4] Early on in development of the first edition of the festival, the team behind DesertFest partnered with Sound of Liberation to make a German equivalent, DesertFest Berlin.[1] The first band announcement for DesertFest London took place on 24th October 2011.[5]

The first edition of the event took place in Camden, London between 6th and 8th of April 2012.[6]. The venues for the first edition of DesertFest London were The Underworld, Purple Turtle and The Black Heart.[6] The event has remained annual, taking place within the months of April and May. Though still taking place in Camden, venues have differed throughout the years, with larger venues, such as The Electric Ballroom and Koko.[7] The event will return for a 5th year in 2016, taking place from the 29th April to 1st May.[8]

The first edition of DesertFest London took place on the 6th, 7th and 8th of April 2012.[6] The venues of this first DesertFest London were The Underworld, Purple Turtle and The Black Heart, all situated in the Camden area of London.[6] The first bands were announced on 24th October 2011 and were Orange Goblin, Church of Misery, Truckfighters, Valient Thorr and Gentlemans Pistols.[9] The headliners for the event were Karma To Burn, Orange Goblin and Corrosion of Conformity.[10] The festival played host to over 50 bands and sold out before the event.[1]

DesertFest 2012 partial lineup poster
Add a photo to this gallery

The second DesertFest London took place on the 26th, 27th and 28th April 2013.[11] The event was held in four venues; Electric Ballroom, The Underworld, Jazz Cafe and The Black Heart. In addition to the main venues, 2013's edition saw the introduction of the Vans Store Stage, hosting intimate and acoustic sets.[12] The first band announced for the festival were Lowrider.[11] The headliners for 2013's event were Fatso Jetson, Unida and Pentagram. The event was notable for bringing about the reunion of the bands Unida, Dozer and Lowrider.[2] All three bands played the Electric Ballroom on the Saturday of the event.

The third DesertFest London took place on the 25th, 26th and 27th April 2014.[13] The event was held in three venues; Electric Ballroom, The Underworld and The Black Heart.[13] In addition to the main venues, the Vans Store once again hosted a handful of acoustic and intimate sets. [13] The first band announced for the event were Black Rainbows on 30th September 2013.[14] Headliners for 2014's event were Spirit Caravan, Kvelertak and Boris.[13] Spirit Caravan, like several bands from the 2013 event, were encouraged to reform by the DesertFest organisers to play the event.[2] 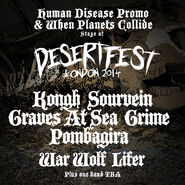 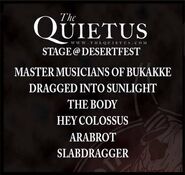 Vans Stage 2014 Poster
Add a photo to this gallery

The fourth DesertFest London ran on the 24th, 25th and 26th April 2015. [15] The event was held in six venues of Camden, London; Electric Ballroom, The Underworld, The Black Heart, Jazz Cafe, Purple Turtle and, for the first time, Koko. The first band announced for the event were headliners, Sleep, almost a full year before the festival on May 1st 2014.[15] Joining Sleep as headliners for the event were Red Fang and Eyehategod. [16] 2015's event also saw dedicated one day stages curated by Metal Hammer[17] and Prog Magazine.[18]

Metal Hammer Stage 2015 Poster
Add a photo to this gallery

DesertFest London 2016 will take place, once again in various venues of Camden, from the 29th April to the 1st May 2016.[8] On September 2nd 2015, the first bands for the 2016 edition were announced, with Electric Wizard confirmed as one of the weekend's three main headliners, and Elder, Conan, Raging Speedhorn and Witchsorrow also confirmed to appear. [20] Venues for the 2016 edition were also confirmed on the same day to be Electric Ballroom (main stage for Friday and Saturday), Koko (main stage for Sunday), Camden Underworld, The Black Heart and The Jazz Cafe (which will be curated by The Quietus on the Saturday).[21] A second batch of nine bands were announced on October 28th 2015.[22] On November 5th, the second headliner for the 2016 edition was revealed as Corrosion of Conformity (with Pepper Keenan).[23] On December 21st, it was announced on Desertfest's official Facebook page that Old Empire would once again be curating a stage at the Electric Ballroom on the Sunday of the festival.[24] The Old Empire stage will be headlined by the previously announced Godlesh.[24] A further 10 bands were announced on December 22nd, including the recently reformed Asteroid.[25] The lineup for a stage curated by The Quietus was announced on the 15th of January 2016.[26] The Quietus stage will be hosted on Friday 29th April at The Black Heart and is set to be headlined by JK Flesh.[26] A stage curated by Human Disease and When Planets Collide was announced on January 22nd.[27] The stage will be hosted on Saturday 30th April at Camden Underworld.[27] On 26th January, the previously announced band Stoned Jesus stated via a post on Facebook that they could no longer play the festival[28]; this was later confirmed by Desertfest.[29] On 28th January, the festival added16 more bands, including the third headliner Russian Circles.[30] This announcement also confirmed that Corrosion of Conformity would headline the Friday, Russian Circles would headline the Saturday (with Pelican as main support) and that Electric Wizard would headline the Sunday (with Trouble playing a 30th anniversary show as main support).[30] On 8th February, the full day and stage splits for the festival were announced.[31] On 22nd March, the final bands were announced; Telepathy were added to The Black Heart on the Saturday[32] and a free entry stage held at The Devonshire Arms was also added to the Saturday.[33]

On 13 October 2016, after a successful fully sold out Desertfest, the 2017 edition was announced. With Malleus Rock Art Lab once again providing the artwork, the dates were confirmed to be on 28 - 30 April in London. The initial lineup featured eight bands and Turbonegro as the first headliner.[34] On 25 January 2017 it was announced that The Quietus had curated a stage for one of the days of the fest.[35] A pre-show happened at The Black Heart in London on 27 April featuring Iron Void and Wretch.[36]

On 3 August 2017 the dateswould be announced for the 2018 edition of Desertfest London, set for 4 - 6 May 2018.[37] The first band announcements would come on 22 September 2017 with seven bands announced and the first headliner of Monster Magnet. The second round of announcements came on 12 November with Graveyard announced as the second headliner. On 24 November 2017 it was announced The Old Empire would curate one of the stages at Desertfest London (4 May, Electric Ballroom) with Napalm Death as the stage's headliner.[38] The final headliner of High on Fire and the rest of the lineup would be announced on 12 January 2018. A pre-show ceremony was announced on 9 March, featuring ASG and Flask House at The Black Heart on Thursday 3 May 2018.[39]

On 24 July 2018 the dates would be announced for the 2019 (8th annual) DesertFest in London, with pre-sales and bands to be later announced. The festival is set between 3 and 5 May 2019[40] On 21 September 2018 the first leg of bands for the 2019 edition would be announced, including Dvne, We Hunt Buffalo, Colour Haze, Earthless, Witch, Kadavar and All Them Witches.[41] On 29 November the second wave of bands would be announced including Om, Wovenhand, Stoned Jesus, Mondo Generator and The Great Electric Quest among others.[42] On 20 December the festival would announce the full 5 May 2019 lineup at the Roundhouse, featuring Colour Haze, Earthless, Witch, All Them Witches and Sunday headliner Fu Manchu.[43] On 31 January 2019 the last headliner in Amenra would be announced along with full day splits (With the Devonshire Arms stage TBA).[44] On 5 April 2019 the full schedule would be posted including twelve additional acts performing at The Devonshire Arms over the weekend. Sunday's bands at Devonshire would be a curated showcase of Americana bands entitled The Black Deer Stage.[45]

A handful of bands would notably cancel on the weekend of Desertfest London 2019. Drore would drop off on 3 May due to one of the members sustaining a broken hand while on the same day it would be announced that Naxatras would drop off due to scheduling complications. Monkey3 would also cancel their performance on 4 May due to some of their equipment being damaged.

A 2020 edition of DesertFest Berlin would be announced not long after the 2019 edition would be finished, though it would not be until 30 September 2019 that the first bands would be announced.[46] The first announced bands would be Masters of Reality, Brant Bjork, Corrosion of Conformity, Orange Goblin, The Picturebooks, Green Lung, The Brothers Keg, Possessor and Black Orchid. A following update would announce Witchcraft as one of the headliners. On 16 January 2020 several more bands would be announced, including Graveyard as a headliner. By 7 February the majority of the lineup was revealed, with day and stage shifts.[47] On 27 March 2020 it would be announced that due to the CO-VID19 pandemic Desertfest London would be canceled, with the organizers working towards the 2021 edition.[48]

The 2021 edition of Desertfest London, billed as "A Decade in The Desert", would be announced and set for May 2021 following the announcement of the 2020 edition being canceled. It would eventually be postponed to 2022.

Retrieved from "https://riffipedia.fandom.com/wiki/Desertfest_London?oldid=23393"
Community content is available under CC-BY-SA unless otherwise noted.