Desertfest Athens is one of several festivals which run under the DesertFest banner. Each year, the festival is a two day event showcasing bands from the whole stoner rock scene. The festival takes place in Athens, Greece. Desertfest Athens was the third of the Desertfest events to be introduced, first being held in 2016 (unlike its English and German counterparts, which were both first held in 2012[1] and its Belgian counterpart, which was first held in 2014).

The original DesertFest, DesertFest London, was first conceived of by Reece Tee and Jake Farey of the music promotions company Desertscene.[2] Desertscene started organising shows in 2009, the first of which was Truckfighters.[2] After gaining experience promoting individual bands and hearing the people at those shows' desire for a UK festival like Roadburn Festival, they decided to create DesertFest.[2]

The first Desertfest London was officially announced on 26th July 2011 via a Facebook post,[3] but posters advertising the festival were placed at London's High Voltage Festival.[4] Early on in development of the first edition of Desertfest London, the team behind the festival partnered with Sound of Liberation to make a German equivalent, DesertFest Berlin.[1] The first DesertFest Berlin was publicly announced, via Facebook, on October 9th 2011.[5] After two successful years in London and Berlin, DesertFest was expanded into Belgium. On 23rd April 2014, the newly created Desertfest Belgium Facebook page confirmed that a Belgian edition of Desertfest would take place.[6] The event took place between Friday the 10th and Sunday the 12th of October, at Trix in Antwerp, Belgium.[6]

On March 24th 2016, the first edition of Desertfest Athens was announced. The event will take place at Iera Odos in Athens, Greece. The festival took place on 7th and 8th October 2016.[7][8] On April 16, the festival announced it's inaugural lineup.[9]. Automaton and Black Hat Bones were both announced on May 5, 2016. On May 25, 2016, more bands were announced to the bill including Torche and My Sleeping Karma.[10] 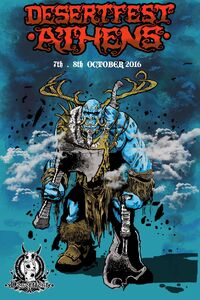 Poster for the 2016 edition of Desertfest Athens

On 20 March 2017, DesertFest announced that a 2017 edition of DesertFest Athens in the works. Dates, the venue and the first six bands would be announced on 11 April 2017.[13] Eventually the lineup would be up to seventeen bands over two days, spread out over two stages. A warm-up party would be held at Off The Chain bar on 5 October.[14] Initially on the second stage, Radio Moscow would be moved to the main stage on 6 October.

Retrieved from "https://riffipedia.fandom.com/wiki/Desertfest_Athens?oldid=12594"
Community content is available under CC-BY-SA unless otherwise noted.