Riffipedia - The Stoner Rock Wiki
Register
Don't have an account?
Sign In
Advertisement
in: Event, Festival, Berlin,
and 3 more

Edit
watch 01:36
We're Getting Mutants in the MCU - The Loop
Do you like this video?
Play Sound

Desertfest Berlin is one of several annual festivals which run under the DesertFest banner. Each year, the festival is a three day event showcasing bands from the whole stoner rock scene. The festival takes place in Berlin, Germany. Like its English counterpart, the first event ran in 2012[1].

The original DesertFest, DesertFest London was first conceived of by Reece Tee and Jake Farey of the music promotions company Desertscene.[2] Desertscene started organising shows in 2009, the first of which was Truckfighters.[2] After gaining experience promoting individual bands and hearing the people at those shows' desire for a UK festival like Roadburn Festival, they decided to create DesertFest.[2]

The first Desertfest London was officially announced on 26th July 2011 via a Facebook post,[3] but posters advertising the festival were placed at London's High Voltage Festival.[4] Early on in development of the first edition of Desertfest London, the team behind the festival partnered with Sound of Liberation to make a German equivalent, DesertFest Berlin.[1]

The first DesertFest Berlin was publicly announced, via Facebook, on October 9th 2011.[5] The first event was set to take place between Thursday 19th and Saturday 21st April 2012, and was initially to take place solely at Astra KulturHaus[5] (though later into development Festsaal Kreuzberg replaced Astra as the venue for the first day of the festival[6] The event has remained an annual fixture, in later years taking place within the month of April, exclusively at Astra KulturHaus. The fifth edition of the event is scheduled to take place between the 28th and 30th April 2016.[7]

The first DesertFest Berlin was announced on October 9th 2011 via a Facebook post.[5] The event ran from Thursday 19th to Saturday 21st April 2012, and was initially to take place solely at Astra KulturHaus.[5] Later into development Festsaal Kreuzberg, which like Astra is situated in the Friedrichshain-Kreuzberg borough of Berlin, replaced Astra as the venue for the first day of the festival[6] On 28th October 2011, Brain Police were the very first act announced for the festival.[8] The main stage headliners for the event were Orange Goblin[9], Motorpsycho[10] and Colour Haze[11] As well as the official main festival, an after-show was also held at Raw Tempel on April 21.[12] 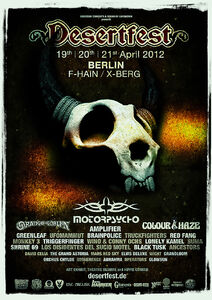 On August 14th 2012, DesertFest Berlin's Facebook page confirmed via an uploaded photo that the even was returning in 2013, taking place between Thursday 25th April to Saturday 27th April.[14] For the 2013 edition, Astra KulturHaus was the sole venue, with both the Main Stage and Foyer Stage located in the Astra. [15] On October 11th, Norwegian blues-psych band Lonely Kamel were confirmed as the first act for the festival.[16] The main stage headliners for the event were initially confirmed to be Pentagram[17], Unida[18] and Witchcraft[19]. On 24th April, three days before they were scheduled to headline the festival, Witchcraft cancelled their tour, including DesertFest Berlin, due to what the band described as "serious health issues".[20] As a result of Witchcraft's cancellation, Troubled Horse joined the lineup.[20] Orchid, who were initially set to be the last band on the Foyer Stage on the Saturday night, were bumped up to headline the Main Stage due to Witchcraft's absence.[21] 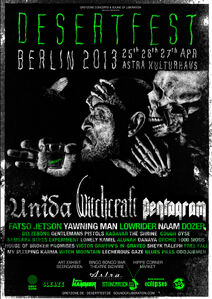 On September 26th 2013 a third edition of DesertFest Berlin was confirmed via the event's Facebook page.[22] The 2014 edition of DesertFest Berlin took place from Thursday 24th to Saturday 26th April, once again returning solely to the Astra Kulturhaus in Berlin.[22] On 13th October, Italian heavy psych band Black Rainbows were confirmed as the first act for the festival.[23] The main stage headliners for the event were confirmed to be Spirit Caravan,[24] Kvelertak[25] and Clutch.[26] 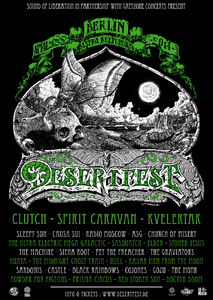 On 2nd May 2014 a fourth edition of DesertFest Berlin was confirmed via the event's Facebook page.[28] The 2015 edition of the festival took place between Thursday 23rd and Saturday 25th April, again returning solely to Astra Kulturhaus in Berlin.[28] On 1st September 2014, Orange Goblin were confirmed as the first act for the festival, taking the first headline slot.[29] Orange Goblin treated this, and their appearance at DesertFest London, as a 20th anniversary celebration, playing their third album, The Big Black, in its entirety.[29] The two other main stage headliners for the event were confirmed to be Brant Bjork and The Low Desert Punk Band[30] and Red Fang.[31] A warm-up show was held prior to the festival at Stattbad on April 22 in Berlin, Germany.[32] 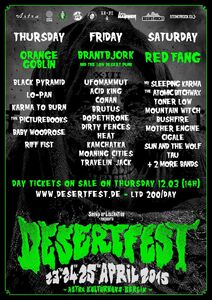 On May 19th 2015, it was confirmed that the next edition of Desertfest Berlin will take place between the 28th and 30th of April 2016.[7] On 10th September 2015, the first bands for the 2016 edition were announced; the full first announcement included Electric Wizard, who are set to headline the festival, with Elder, Mothership, Somali Yacht Club and Wo Fat also playing.[36] As of 17th January 2016, 22 bands have been announced for the festival, with more to be confirmed.[37] On 2nd February 2016, DesertFest Berlin's Facebook page announced the day splits, confirming that Truckfighters and Crowbar would join Electric Wizard as headliners.[38] On 22nd March, the final three bands, Black Pussy, Baby in Vain and Greenleaf, were announced.[39] On the same day, the festival was confirmed to be completely sold out.[39]

This is the current lineup for Desertfest Berlin 2016. Stages and times are unclear but day splits have been announced. As such, bands will are listed by day and the order in which they appear on the latest official poster.

On 19 October 2016 it was confirmed that DesertFest Berlin would take place between 28 and 30 April 2017, returning to the Astra Kulturhaus.[40] Later it would be announced that Cassiopeia and Badehaus would be additional venues to host bands alongside Astra, which would cause some criticism among fans.[41] A warm-up show was added on 27 April at Cassiopeia.[42] An afterparty was also announced for 29 April at Cassiopeia featuring DJ sets from Johanna Sadonis (Lucifer, The Oath) and Nicke Anderrson (The Hellacopters)[43]

On 20 September 2017, the 2018 edition of Desertfest Berlin was announced to be on 4 May - 6 May 2018. However a major change was a new venue in Arena - Kreuzberg in Berlin and going back to the two stage format.[44] On 22 September day tickets would go on sale with Monster Magnet announced as one of the headliners, along with a host of other bands. There would also be DJ sets through the weekend as well (Jan Schwarzkamp on 4 May at Glashaus and DJ Volksradio Moos on 5 May at Glashaus.

Community content is available under CC-BY-SA unless otherwise noted.
Advertisement