Buzz Osborne (Better known as King Buzzo) is a musician born in Montesano, Washington, USA. He is known as one of the founding members of The Melvins, a band heavily influential in the formation of grunge, sludge and to some extents stoner and doom metal.

Fantômas began just before the collapse of Faith No More, as a series of spasmic, avant-garde metal songs composed by vocalist and bandleader Mike Patton. Patton then sent the demos to guitarist Buzz Osborne (of Melvins), bass guitarist Trevor Dunn (of Mr. Bungle) and drummer Igor Cavalera (of Sepultura), with the intention of forming a supergroup. Cavalera declined the offer, but recommended who he thought would be perfect for the project: Dave Lombardo of Slayer, who accepted.

Fantômas' first live performance was on June 18, 1998 at Slim's in San Fransisco.[1]The self-titled album (aka Amanaza al Mundo) would be released in April 1999 with an album of movie/television song covers in the form of The Directors Cut in 2001. Delìrium Còrdia would follow in 2004 and Suspended Animation in 2005.

In mid-2005, the band toured Europe with Terry Bozzio on drums, as Lombardo was on tour with Slayer. Lombardo returned to the band for the final dates of the tour, which concluded on September 15, 2005.

On May 13, 2006, Patton revealed to Billboard.com that a fifth Fantômas album has been planned. Of the album, Patton says, "The next record is going to be an all-electronic affair. It's going to take some creative planning on how to record it and execute it, but there will be no acoustic instruments on it whatsoever. We're pretty much about to go into hibernation mode. I need to, once I have a little time, go back to the drawing board and start writing the next one." In November 2008, Rock-a-Rolla, a UK-based alternative music magazine, exclusively revealed on their website that the new album was currently being worked on and a tentative June 2009 release was possible, however, in the May 2009 issue of Rock-a-Rolla, in an interview with Greg Werckman, Werckman stated that Mike "hasn't even begun" recording the next Fantômas record.

On July 21, 2011, Rock-a-Rolla revealed that Fantômas would be releasing their December 31, 2008, performance at San Francisco's Great American Music Hall as a DVD and a standalone audio download, titled The Director's Cut Live: A New Year's Revolution. On September 16, 2014, Ipecac Recordings announced that on Record Store Day they would be releasing a boxset titled Wunderkammer, containing all of the Fantômas albums on vinyl as well as a cassette featuring Mike Patton's original demos for the band.

In December of 2014 Fantômas played their first shows in six years as part of the Rockout Festival in Santiago, Chile, however no plans have been announced to date regarding a new studio recording. In June of 2017 Fantomas would play again at a one-day festival alongside The Crystal Method, Melvins, Clutch, Primus and Tool. 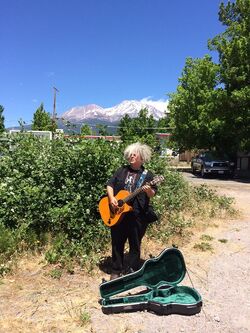 In October 2013, King Buzzo did an interview with Ernie Ball doing an acoustic version of "Revolve" for the session. Some months later, Buzzo announced a solo acoustic tour was in the works along with a solo album the next year.

On February 26, 2014 at The Satellite in Los Angeles, California (A Scion A/V sponsored event), Buzzo performed his first solo acoustic set, a mix of originals and reworked Melvins songs. A short tour would follow around the United States that March, including a set at Grumpy's on his 50th birthday.

In Jule and July Buzzo would do a second solo acoustic tour in the United States in support of the album This Machine Kills Artists with Emma Ruth Rundle, Field, Otis B, Adam Faucett and Mary Halveson as rotating support. An Australian solo tour followed in early August with a European solo tour following that September.

Osborne had dated Lori Black for many years during her tenure in the Melvins but split up sometime around when she left the band the first time. Buzzo has been married to graphic designer Mackie Osborne (Who also contributes art to most of the Melvins' output since at least 1994.) since 1992. Osborne currently lives in California with his wife Mackie and his dogs.

He is an avid baseball fan, especially a fan of the Los Angeles Dodgers.

Osborne, despite never watching television, is also a huge movie fan. He has gone on record to state that his favorite movie of all time is "The Treasure of the Sierra Madre" directed by John Huston (With "Lawrence of Arabia" as a close second). Buzzo has also stated that Huston is his favorite director but also a fan of Stanley Kubrick, David Lynch and John Waters.[2]

Osborne has remarked, "From a very early age I was interested in underground music. I never appreciated the big stadium shows in the first place—I cut my milk teeth musically on smaller shows. A much more intimate basis. That’s the lessons I learned from punk rock that I never forgot. That extends to today." As referred to before, he had a very wide set of musical influences since his childhood, ranging from arena rock to glam rock to Punk rock to power pop and more. Osborne has called himself a lifelong "musical anthropologist" and stated that "since I never grew up around people who gave me any indication of how one was supposed to act, I was equally excited seeing the Kinks as I would be by seeing a punk rock band. Or Cheap Trick. In terms of hip hop music, he's stated that his favorite rap album is Run-D.M.C.'s Raising Hell.[3]

Since at least 2009 he has been primarily playing aluminum guitars from The Electrical Guitar Company, citing a preference in size of the fretboard and general tone along with custom Emperor amps (known as "Blown" amps).

For a more detailed discography, see the Melvins page.

Retrieved from "https://riffipedia.fandom.com/wiki/Buzz_Osborne?oldid=11139"
Community content is available under CC-BY-SA unless otherwise noted.