Born Too Late was a festival held primarily in Rochester, New York. It was billed as the first all doom metal festival to be held in the USA. Born Too Late was originally a website dedicated to doom metal music created back in late 1997 by John Gallo of Orodruin, Crucifist, Blizaro.

A second edition of the festival was intended for 2006 but was ultimately held in 2009 at The Bug Jar in Rochester, New York. 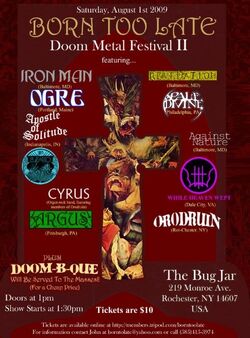 Retrieved from "https://riffipedia.fandom.com/wiki/Born_Too_Late_(Festival)?oldid=8996"
Community content is available under CC-BY-SA unless otherwise noted.