Start a Wiki
Apocalypse Now was a North American tour between Electric Wizard and Warhorse throughout the month of March going into April of 2001. For The Wizard this was their first-ever tour of the United States and in support of the then-new and critically acclaimed Dopethrone, released in September of 2000 via Rise Above Records. In the case of Warhorse they would be touring in support of As Heaven Turns To Ash... released in January of 2001 via Southern Lord Records. 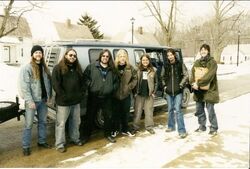 In late 2000 it would be announced that both Electric Wizard and Warhorse would be touring together for a 30+ day jaunt through the United States, billed as Apocalypse Now with a host of supporting acts along the way. Thus, the 4 March 2001 performance would be The Wizard's first-ever live performance on American soil. The band, along with Dopethrone cuts, also performed a host of songs from Come My Fanatics... and Supercoven. Despite rumors that Bagshaw had quit the band he did perform with the group for this tour, clarifying the alleged rumors in a handful of interviews.

On 7 March 2001 the tour almost came to an abrupt end when Electric Wizard were detained and interrogated in Richmond, VA late in the afternoon during load-in and sound check for their show that evening at Twisters. War Horse, the support band on all tour dates was in the venue setting up when Electric Wizard was spotted by the police entering a van in the parking lot with a local man.

All members of the band and the local man were in the tour van when they realized that they were completely surrounded by local police. The band was asked to step out of the van, at which point the interrogation began. The van was subjected to a thorough search, which revealed no illegal substances.

The only possession of drugs that could be ascertained was the amount being literally held by the band and the local man. A very lengthy cross examination ensued. Erik Larson of Alabama Thunderpussy was able to intervene on behalf of his British colleagues and get the police to drop the charges.[1]

John Perez (Solitude Aeturnus, Liquid Sound Company) handled duties on this tour as road manager and as the merch guy.

Notably nearly a dozen of the dates from this tour have shown up as bootlegs in a host of trading circles. The Khyber Pass, Twister's, Gabe's Oasis, Balcony Bar and Covered Wagon Saloon performances among others have been common in downloading circles and on YouTube.

NOTE: The band's set varied from night to night and is only a list of songs known to have been performed on this specific tour.