Altar is a collaborative album between Sunn O))) & Boris, released on Halloween 2006 via Southern Lord Records and Inoxia Records. Though the only collaboration between the two groups (Among a plethora of guests) both bands would perform the album together on a handful of occasions.

In 2006 Sunn O))) and Boris would join together at Avast Studios among other locations to record this collaborative effort. In what was described as a "true collaborative effort" no rehearsals were composed prior and the five members sat in a studio, conceptualizing the entire record together. Several friends and collaborators were invited to join in the sessions, including Joe Preston (Earth, Melvins, High on Fire), Dylan Carlson and Adrienne Davies (Earth), Jesse Sykes (Jesse Sykes and The Sweet Hereafter), Tos Nieuwenhuizen (Beaver, God, etc.) and Kim Thayil (Soundgarden) just to name a few.[1]

Altar would be announced in the summer of 2006 via Southern Lord Records, promoting the songs "Etna" and "The Sinking Belle (Blue Sheep)". A 2CD set limited to 5000 copies would feature the disc Altar Prelude (SatanOscillateMyMetallicSonatas), the title a palindrome and a reference to a Soundgarden EP included as a bonus to Badmotorfinger. It would feature the 28-minute track "Her Lips Were Wet With Venom", featuring Dylan Carlson. Altar saw release on 31 October 2006 to positive reviews from several publications including Pop Matters,[2] Metal Reviews,[3] Your Last Rites,[4] and Exclaim! to name a few.[5]

Inoxia Records would issue the Japanese CD and 2CD edition, both of which featuring "The Sinking Belle (Black Sheep)" as a bonus track. Southern Lord Records would release the 3LP, pressed on 180g vinyl. This elaborate edition in a full color gatefold jacket/book would be held in heavy black sleeves on black print. This LP set would included "Her Lips Were Wet With Venom" and liner notes by Kim Thayil, in February 2007. The Daymare Recordings Vinyl Edition featured different artwork and an exclusive bonus track in "The Sinking Belle (White Sheep)", limited to 1000 copies. A 3LP picture disc version of the album, limited to 500 copies, was sold exclusively in December 2007 for the live performance of Altar at The Forum in London, England.

Sunn O))) and Boris would collaborate on three occasions to present "Altar". The first presentation would take place on 10 December 2007 at The Forum in London, England. The other two would take place in New York: 5 September 2010 at Kutsher's Hotel and Country Club in Monticello (As part of ATP New York 2010) and 7 September 2010 at the Brooklyn Masonic Temple in Brooklyn. 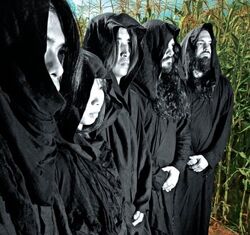 NOTE: The numbers depict what tracks each performer plays on with their respective instrument. "1 - 6" denote performances on the main six tracks. "J1" & "J2" denote the Inoxia bonus tracks and "7" depicts the 2CD/vinyl bonus track.

Retrieved from "https://riffipedia.fandom.com/wiki/Altar?oldid=20488"
Community content is available under CC-BY-SA unless otherwise noted.