Start a Wiki
Acid Witch are a death/doom band from Detroit, Michigan. Formed in 2007 by Shagrat and Slasher Dave, this band is known for it's mix of doom metal riffs, death metal vocals and incorporating a lot of inspiration from Halloween and 80s horror films. The band tend to call themselves "Halloween Metal" with a tongue-in-cheek sense of humor approach to writing music.

Acid Witch began in 2007 by Slasher Dave and Shagrat in 2007, initially worked up as an instrumental project by Slasher Dave but eventually evolved into a doom metal band over time being influenced by Pagan Altar and Witchfinder General.

After submitting a demo to death metal/goregrind label Razorback Records they took interest in releasing the band's debut album, Witchtanic Hellucinations, on October 24, 2008. Two EP releases would follow in Witch House' and Midnight Mass in 2009 and 2010, respectively as original singer Lasse Pyykkö would depart from the band. 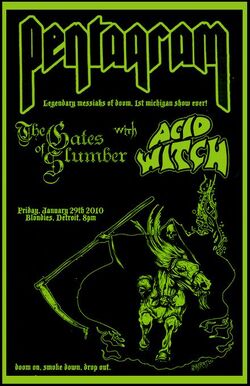 Though for a time the band appeared to be studio-only with Witchtanic Hellucinations being a one-off[2] the addition of Gnarls Charles and Mike Tuff in 2010 would lead to the band performing live, mainly in Michigan with the occasional out-of-town show such as appearances at Maryland Deathfest. The first Acid Witch show was on January 29, 2010 with The Gates of Slumber and Pentagram. Acid Witch's second album Stoned would be released in November 2010 via Hell's Headbangers Records.

In 2014, Acid Witch toured with Child Bite in the USA leading up to an appearance at Housecore Horror Fest.[3]

In 2015, Acid Witch toured Europe with Bonehunter. This included an appearance at Roadburn Festival.[4] On April 10, 2015 the band would release an EP entitled Midnight Movies. This EP features covers of songs from 80s horror films, such as Fastway's "After Midnight" from the movie "Trick or Treat" and 45 Grave's "Partytime" from "Return of the Living Dead". Later in 2015 the band also contributed a cover of Celtic Frost's "Cherry Orchards" to the Morbid Tales! A Tribute to Celtic Frost compilation.

One June 16, 2016, Acid Witch announced their third album entitled Evil Sound Screamers is expected to be released on Halloween 2016.[5] Sometime after it was announced that Acid Witch would be the headlining act of the Psycho Road Tour, a touring festival organized by the people behind Psycho Festival. On 20 October 2017 the band announced they would be releasing their third album Evil Sound Screamers digitally via Hell's Headbangers Records on 31 October 2017, with physical releases to follow. Following a string of shows the band announced a mini-tour that August with Snafu, Child Bite and Against The Grain.[6]

NOTE: The members presented here only reflect the live lineup and not the exact performers on most of the studio recordings.

Retrieved from "https://riffipedia.fandom.com/wiki/Acid_Witch?oldid=20427"
Community content is available under CC-BY-SA unless otherwise noted.